Twitter is a popular and useful social media tool. And the best thing is: many children love using it! Try and harness this enthusiasm and develop learning through it.

There are lots of ways in which Twitter can be used in the classroom. Below I have listed 10 ideas in which it could be integrated in lessons:

1) Ask pupils to recount an event – a Tweet for each section. Another idea is to write diaries – try writing Tweets in character i.e. Anne Frank when she was in hiding.  Here is an example my class did when learning about Charles Darwin in a Science lesson:

Another example of a way to use Twitter in the classroom. #educators #teched #edtech #mlearning #edchat pic.twitter.com/tIsg86bdVU

2) Use the summarising nature of Twitter to support students in taking notes in class or whilst watching a film. Encourage them to have a shared, unique hashtag for the notes e.g. the class, topic and notes (#6JVictorianNotes) so they can be easily located.

“I used to imagine adventures for myself, I invented a life, so that I could at least exist somehow.”― Fyodor #Dostoyevsky, #Notes #Quotes

4) Create a class hashtag. This makes it great for discussions, sharing information (text, video and pictures) and it is easy to find all the information.

5) In lessons, encourage students to research using Twitter. Ask if sources are reliable? Here is a Tweet I showed my class from a rap star – I asked my class if he was a reliable source (this resulted in a fantastic discussion):

6) Challenge your students to write a story in 140 characters. It has to have a beginning, middle and end. They can then edit and evaluate their stories (the editing process was very interesting to watch). This was one a student in my class did:

One day I was at Loch Ness and I saw the famous monster. When I took a photo, it unleashed it’s anger on me & bit off my right arm! I died.

7) The students could Live Tweet a book whilst reading i.e. share opinions and summaries of what is happening. Here’s a simple example I found on Twitter:

8) Create a class poll. The students can vote and share their opinions on an issue. Or use the poll as a simple assessment tool in which multiple choice questions are set.  Here is an example of a Twitter poll:

Do you think playing music in class has an impact on learning? #edchat #education #music #teaching #teachers #edu

9) Connect with other schools around the world – great for cultural understanding and language practice. Have a shared hashtag.

10) Get students to live Tweet an event, lesson or school trip.  Here is an example of one my school did when we visited a fort:

*If your pupils are not old enough, or you don’t want them to use Twitter, then use this template.  Print it and students can write on it.  Remind them not to go over 140 characters per box!

Or use this fantastic website in which ‘fake’ Tweets can be made: http://www.classtools.net/twister/ 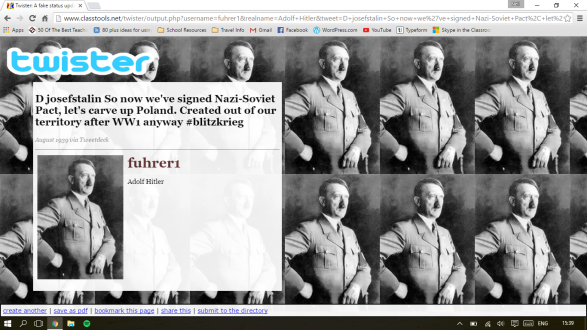 Let me know how you use Twitter in your lessons by commenting below.